The Early History of Takilma: Mining and Logging

The largest house in Takilma at the time was known as the boarding house, and had been built by G.B. Fife and later finished by Ole Valens, a Swedish immigrant.  John and Mary Valens, his children and many other relatives of the Valens family had welcomed boarders for decades, but it ended up being the home of a woman by the name of Mrs. Heatherbee in the 1970’s. She seemed to have fallen on hard times trying to raise six children there and the State was going to take her kids away. She was desperate to leave and sold it to Dred Mikal in very poor condition around 1976.  So it happened that the “boarding house” was purchased by a hippie and is still standing.
Gary S., who lived at his parent’s ranch on Sauer’s Flat in Kerby, remembers coming to Takilma during his teenage years with his family to run their cattle up into the mountains. He recalled that they would, “Drive em up in the mountains to fatten them on the rich grasses, and spend the whole summer up there.” Gary remembered when “They would take a wagon to the old Holland Grange hall, and ride it back after the dance, so they could do their chores in the morning. Everybody got together on the weekends for potlucks.  I knew everybody back then.”
Being a local boy, whose family were among the earliest settlers of the Illinois Valley, Gary still found a lot to like about Takilma in the 60’s and 70’s. He said, “I was more into that culture than I was into the redneck culture. Lots of people were migrating up here then and it was crazy. I loved Takilma. It was the place to be at the time. Everybody had long hair and nick names, and everybody wanted to move to the mountains and get their heads together. It was a movement.” Gary remembers living in a small cabin in Allen Gulch, during a period when he was roughing it, but after that he enlisted in the military and went to Vietnam. When he came home he married and started a family of his own. 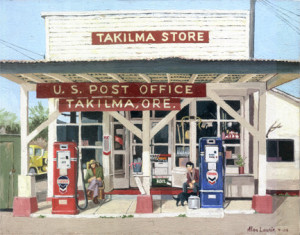 The old Takilma Store in 1978: a painting by Alan Laurie

Takilma in the early days was a mixture of old timers and hippies, but slowly the old timers sold their places and got away from a lifestyle they perhaps didn’t care for anymore. Times had changed and the tables were turning. One man’s trash can be another man’s treasure, so Takilma was just that bit of gold dust to glimmer in the eyes of the new age hippies. It had been raped and pillaged, burned and degraded, but still the land lived on and welcomed a new wave of “green” people. Perhaps it can be said that the Indian Spirit reclaimed the land.
Here then, are a few of the voices of Takilma; certainly only a small slice of the whole pie, but definitely some people who have given a  great deal to the quality of life, now enjoyed in Takilma.  I mentioned the general reasons that a population of hippies found themselves living in Takilma, Oregon, but now I’d like to dig deeper into some of the stories about how people moved to Takilma and what made them stay.
One of the first “hippies” to move to Takilma was Delbert K., who came from Southern California in 1968 to the tiny, rural, unincorporated town of Takilma, because the land was cheap, remote, wild, un-improved, lawless, and largely un-inhabited. Delbert left behind a struggling business in Southern California and brought his family north, after receiving some letters from a friend in Oregon who worked at the old Takilma Store, describing a place “like paradise”. 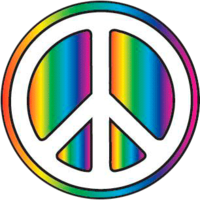